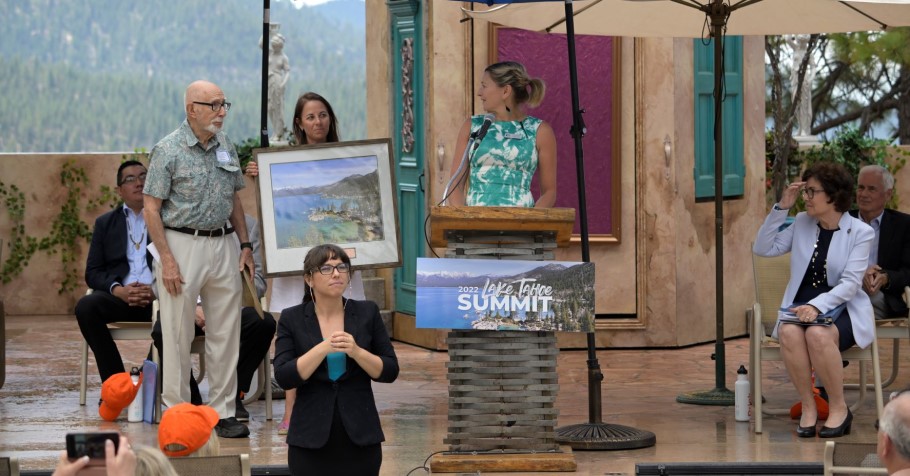 Sand Harbor, Nev. – Dr. Charles Goldman, a legendary limnologist and distinguished professor emeritus at the University of California, Davis, received the Dianne Feinstein Lake Tahoe Award at the 26th annual Lake Tahoe Summit last week. The award honors exemplary leaders with a proven track record of work to improve Lake Tahoe’s clarity, natural beauty, and overall environmental health. Dr. Goldman famously sounded the alarm in the 1960s that harmful development practices in the Tahoe Basin were destroying the lake’s famed water clarity. His work led to the decision to export sewage from the watershed and has helped guide science-based decision making for decades.

“It is both humbling and an honor to receive this award after the privilege of being able to study and help promote the conservation of Lake Tahoe for over sixty years,” said Dr. Goldman. “It is essential to maintain both Tahoe conservation and the mountain economy for the sake of this and future generations.”

Dr. Goldman taught oceanography and limnology, the study of lakes and other freshwater bodies, at UC Davis. He has worked on every continent on the globe, from Oregon’s Crater Lake, to Antarctica, where a glacier is now named after him. Lake Tahoe, however, remains his favorite. His early records on lake clarity allow Lake Tahoe to have one of the longest-running data sets of any lake in the world. He also founded the Tahoe Research Group at UC Davis, now known as the Tahoe Environmental Research Center with a world class laboratory.

“Dr. Goldman’s achievements are the foundation for the conservation work we’re all so dedicated to today,” League to Save Lake Tahoe CEO Darcie Goodman-Collins said. “His pioneering science helped save Tahoe from sewage and bad development, and it’s still keeping Tahoe blue today. We can’t thank him enough.”

Over his 52 years of teaching, he was a mentor to 1,500 undergraduate students, more than 100 graduate students, and 37 post-docs. These students have made lasting scientific contributions. During his acceptance speech he asked the audience if any of his former students were present. Several hands raised in response, and among them was Tahoe Regional Planning Agency Deputy Director Julie Regan.

“Dr. Goldman remains a Tahoe legend,” said Regan, who is a doctoral candidate at the University of Nevada, Reno. “Not only did his research raise awareness of declining lake clarity that eventually led to the formation of the unique bi-state compact and this agency, but the profound effect of his teachings continues to inspire students like myself.”

2022 marked the second year of the Dianne Feinstein Lake Tahoe Award. The first award recognized U.S. Senator Dianne Feinstein herself at the 2021 Lake Tahoe Summit for her lifelong passion for the preservation of Lake Tahoe and her commitment to the restoration of the Tahoe Basin over the last 25-plus years.

“It is very fitting that the first person to receive this award after the Senator herself is Dr. Goldman,” Tahoe Fund CEO Amy Berry said. “It would be hard to find two people who have done more for Lake Tahoe. It was an absolute honor to present the award to him at last week’s Tahoe Summit.”

Every few years, the award will be an ongoing tradition at the Tahoe Summit. As candidates merit consideration, the Tahoe Interagency Executive Steering Committee will consider nominations. The steering committee serves as a coordinating body for more than 80 organizations working together through the Lake Tahoe Environmental Improvement Program, or EIP.

The Tahoe Regional Planning Agency leads the cooperative effort to preserve, restore, and enhance the unique natural and human environment of the Lake Tahoe Region, while improving local communities, and people’s interactions with our irreplaceable environment. For additional information, contact Jeff Cowen, Public Information Officer, at (775) 589-5278 or jcowen@trpa.gov.