Lake Tahoe, NV/CA — After 17 years of service with the Tahoe Regional Planning Agency (TRPA), including 13 years as Executive Director, Joanne S. Marchetta has announced she is stepping down as the Agency’s leader effective June 30, the agency said today. The TRPA Governing Board heard Marchetta’s official announcement at its regular meeting today

Board Chair Mark Bruce said of the announcement, “Executive Director Marchetta has been an extraordinarily diligent, strategic, and collaborative leader for the Agency and for all of Lake Tahoe. Her commitment and dedication to the Agency and its mission have been nothing short of phenomenal. During my tenure on the Board, she has proven to be a constant and powerful force behind Lake Tahoe’s many successes.”

Marchetta cited complications with a hearing impairment as central to her decision to step down.

“Although I am not leaving Tahoe, I am leaving it to others to take up Tahoe’s many challenges and to take advantage of the positivity and momentum that we have built together,” Marchetta said. “I am proud of what TRPA has accomplished during my tenure and know that, although challenges abound, the partnerships and collaborative framework that created TRPA is stronger than ever.” 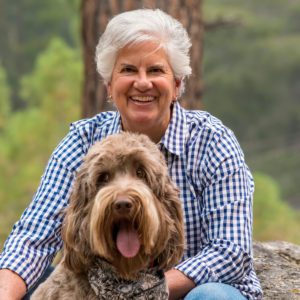 Executive Director Joanne S. Marchetta with Hotai. Marchetta will step down June 30 after 17 years at the agency.

Marchetta’s tenure has been one defined by culture change and partnership building, lasting nearly one-third of the agency’s 52-year history, according to TRPA. Marchetta led the celebrated 2012 Regional Plan Update, which strengthened the bi-state partnership between Nevada and California. The updated plan created incentives for property owners to encourage environmental improvements on private properties and has led to enactment of six local area plans which streamline permit processes and encourage community-led plans.

Since taking the helm, Marchetta has led TRPA in its support of the Tahoe Fire and Fuels Team, which since 2008 has collaboratively completed more than 68,000 acres of hazardous fuels treatments and 55,000 defensible space evaluations.

Under her leadership, the Lake Tahoe Watercraft Inspection Program has become one of the nation’s leading aquatic invasive species prevention programs. The program has inspected more than 100,000 boats since 2008 and in that time there have been zero new species detected in the waters of the region.

Marchetta will remain in her position until June 30, at which time she has requested the Governing Board allow her to oversee a new organizational initiative within the Agency to strengthen staff leadership development. The board will consider her request for a new, part-time position temporary position and the process to hire a new executive director at its meeting June 22. The board named current Chief Operating Officer John Hester as the interim director beginning July 1.

The Tahoe Regional Planning Agency leads the cooperative effort to preserve, restore, and enhance the unique natural and human environment of the Lake Tahoe Region, while improving local communities, and people’s interactions with our irreplaceable environment. For additional information, contact Jeff Cowen, Public Information Officer, at (775) 589-5278 or jcowen@trpa.gov.