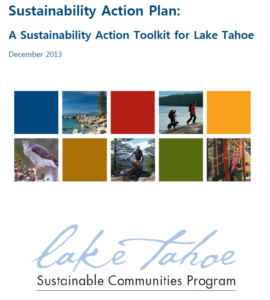 As a major drive-up destination for millions of Northern California and Northern Nevada residents, TRPA and dozens of partners, including inter-regional partners in neighboring metropolitan areas, must implement major improvements for the transportation system, which is the largest contributor of greenhouse gases in both states. TRPA’s Climate Initiative is harmonizing the goals of both states and local governments in the Tahoe Basin while maintaining the Region’s reputation as a global leader in sustainability. 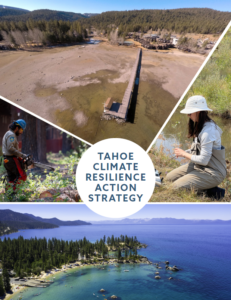 Wildfire, landslides, avalanches, and floods threaten the safety of Tahoe’s residents and visitors. A 2020 study, completed by the California Tahoe Conservancy, identified the impact of climate change at Tahoe. Annual road damages are increasing and could exceed $75 million by 2100. Winter recreation seasons are already shorter and will be cut in half by 2100, causing the ski industry $268 million in annual losses. Loss of lake clarity due to warming water temperatures will impact the region’s $5 billion tourism-based economy. Wildfire threatens $26.9 billion in property value. Meadow degradation threatens sites that are important to the Washoe Tribe of Nevada and California.

Now is the time to confront the climate crisis. Addressing the impacts of climate change up front is more cost-effective than waiting for catastrophe. It would cost three times less to protect infrastructure from floods than to pay for damages from a major flood. Each $1 million invested in climate adaptation projects will reduce property damage by $10 million.

We must act now to preserve and protect Lake Tahoe for this and future generations.

The Tahoe Climate Adaptation Action Primer provides a summary of the impacts listed above.

The TRPA, in continuing progress toward addressing the threats of climate change, regularly measures the region’s greenhouse gas (GHG) emissions.

For the first time, the updated inventory modeled carbon sequestration potential in Tahoe’s forests and meadows and compared those to annual emissions. The updated inventory found that the natural landscape sequestered or stored between 300,000 and 1,000,000 mtCO2e in 2018. This is compared to about 800,000 mtCO2e in emissions for 2018. Carbon sequestration by forests and meadows is a natural climate solution, and the Tahoe region is fortunate to have an abundance of undeveloped landscapes that contribute to this cycle.

Climate adaptation is needed to create a built and natural environment that can respond to climate change impacts that cannot be avoided, like wildfires and flooding. Adapting to the impacts of climate change is necessary to safeguard the quality of life, land, and waters at Tahoe. The states of California and Nevada, Tahoe Regional Planning Agency (TRPA), Tahoe Transportation District (TTD), Washoe Tribe of Nevada and California (Washoe Tribe), and federal, local, and private partners are proactively adapting to climate change and making our communities, infrastructure, and natural resources more resilient.

Both research and action planning to increase the adaptive capacity is summarized below. Advancing climate adaptation will build the region’s resilience to climate change impacts.

Developing climate adaptation actions starts with understanding the vulnerabilities to climate change a region, infrastructure, and community faces today and in the future.

To adapt to known climate impacts, regional partners have created several implementation plans that will build the Region’s adaptive capacity and climate resilience.

Lake Tahoe Climate Resilience Action Strategy builds on existing Tahoe Basin climate and environmental improvement plans to identify five focus areas that will advance equity, create jobs, and build resilience for the Basin’s extraordinary natural resources, 57,000 residents, and an economy that supports 15 million annual visitors. We must act now to preserve and protect Lake Tahoe for this and future generations.

In 2013, a greenhouse gas inventory and future projections were completed for the Tahoe Region. This inventory found that generation of electricity, transportation, and fuel combustion for heating and cooking are the top three emissions sources in the Region and constitute 90% of all emissions. The completion of this inventory led to the creation of the Lake Tahoe Sustainable Communities Program, a multi-sector collaborative funded by the Strategic Growth Council, and the national award-winning Sustainability Action Plan in 2014.

The Action Plan outlined a comprehensive regional approach to reducing greenhouse gas emissions and adapting to climate change (mitigation and adaptation). The Action Plan received Sacramento Section, California Chapter and National awards from the American Planning Association in 2014 and 2015. To date, basin partners have implemented nearly 76% of actions identified in the Action Plan. Other components of the Sustainability Program included an Economic Development Strategy and supported implementation of the Regional Plan through creation of the initial version of the Area Plan Framework.

The work upon which the publication is based was funded in whole or in part through a grant awarded by the California Strategic Growth Council.

In addition to the successful implementation of many of the components of the Lake Tahoe Sustainability Program, other notable inputs and changes in relevant climate change policy and information since 2014 include:

Many communities have emerged as climate leaders with outstanding climate plans, including Los Angeles, San Diego, and Aspen paving a path forward for other communities to take bolder climate action.

Plug-in electric vehicles and other zero-emission vehicles could transform the Tahoe-Truckee Region by dramatically reducing petroleum consumption, greenhouse gas emissions, and noise; improving water quality/clarity; and increasing energy independence and transportation choices. In 2017, TRPA partnered with the Truckee-Donner Public Utility District to create the Tahoe-Truckee Plug-in Electric Vehicle Readiness Plan. The plan’s goal is to support adoption of zero emission vehicles through improved infrastructure, funding, and education. The plan was awarded Best Overall Plan and Best Overall Outreach in 2018 by the Nevada Chapter of the American Planning Association. Click here to learn more about the program.

TRPA is embarking on a process to update our code of ordinances to promote more climate smart development and incentivize resilience.

October 2022 – TRPA staff presented initial code update ideas to the Governing Board for input. Identified priorities will advance to stakeholder input and adoption in 2023.

A variety of mandates to address climate mitigation, adpatation, and resiliency exist at a global, federal, state, regional, and local level. TRPA works with partners across each of these scales to ensure Tahoe is meeting thier intended goals. An incomplete list of relevant climate mandates for the Tahoe Region is listed below.

There is a wealth of knowledge behind our current understanding of climate change and its projected impacts. Climate science is used to inform policies, plans, and projects at Lake Tahoe. Overall, science and advances in climate modeling have allowed a more zoomed in view of climate impacts on the Tahoe Basin. Below is a list of relevant research and other resources related to climate science in the Tahoe Region and beyond.